Over 7.000 demonstrated at Global Marijuana Marches in Germany 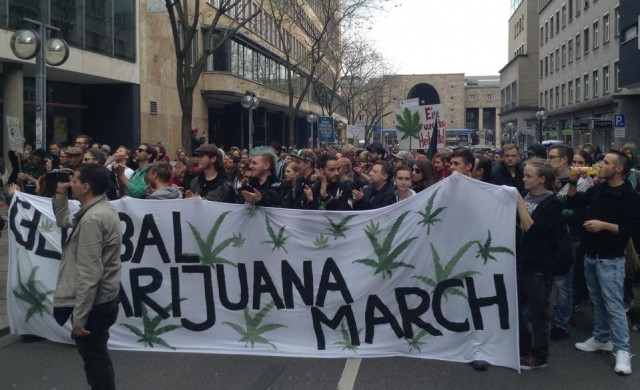 More than 7,000 people in 26 cities participated in Global Marijuana March events all over Germany. The events were scheduled from May 2nd to May 23rd and generated lots of media publicity. The biggest demonstrations were held in Cologne, Würzburg, Berlin, Stuttgart, Frankfurt and Munich with around 500 participants each. We, the German Hemp Association, supported and connected the local organizers and tried to improve the media publicity of the whole campaign.

In February 2015 we began inviting the German hemp community to start numerous Global Marijuana March events. We offered free layouts for posters and flyers, helped with bureaucracy problems and other issues and forwarded a generous financial support of 200€ to each GMM-group. The money was provided by one of our sponsors "Near Dark - Black Leaf".  We had a similar but smaller campaign last year. Due to our efforts the number of cities and people participating in the German Global Marijuana March events has risen significantly. Starting with eleven cities and 2,000 people in 2013 and an increase to 17 cities and arround 4,000 people in 2014 we've now reached over 7,000 people in 27 cities in 2015.

We received positive feedback from all local groups. Each event was a success in some way, although some of them were quite small or were not organized professionally. We only got reports about police interventions in a few cities, e.g. due to people openly smoking cannabis. Only the police of Stuttgart and Ingolstadt searched and controlled people without any reason. In Stuttgart the police also seized hundreds of bags of hemp seeds, which where supposed to be given away as bird food. In most cities bird food was given away without any problems, even public consumption of cannabis seemed to be tolerated.

The media publicity was quite good due to a press release by the DPA, a major press agency, although all nationwide TV-Stations and the biggest newspapers ignored the events.

Motivated by this success, Germany is already preparing for the next GMM in 2016.

Last but not least, the Austrian Hanfwandertag has to be mentioned. With more than 12,000 participants, some even say more than 15,000, it is the mega-event during the GMM in German-speaking areas. Yet it can't be compared to GMMs in Germany, as the Hanfwandertag is the main and central hemp-demonstration in Austria, which attracts thousands of people from all over the country and relies on huge amounts of investments and donations by big companies. The Hanfparade, the major event in German, will be held in August.