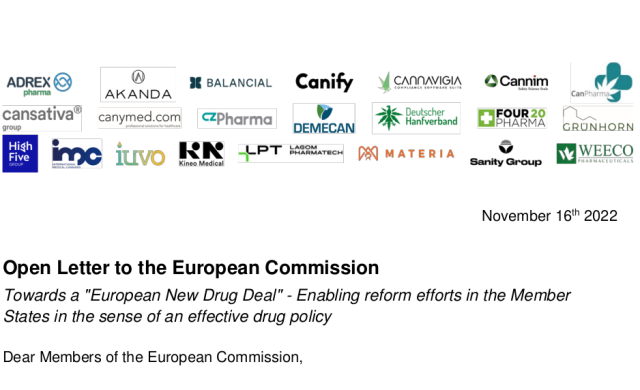 Dear Members of the European Commission,

We, representatives of the European cannabis industry and associations, take note of the fact that progressive approaches towards the use of adult-use cannabis have been prevailing in international comparison for several years. In the European Union, more and more Member States - including Malta, Luxembourg, the Czech Republic and the Netherlands - are embarking to reform their formerly prohibitive drug policies in a result-oriented manner allowing for a new cannabis policy framework covering all its use cases.

Most recently, the government of the Federal Republic of Germany has presented a key issues paper on how it intends to transfer the formerly illegal market for adult-use cannabis into a regulated framework. These reforms are in no way contradictory to the global goals of improved health protection. Therefore, we would welcome a timely, in-depth evaluation of the capacities of European drug policy under the global drug control treaties by the European Commission. By sharing the German interpretation of those treaties, the Commission will allow Member States to implement forward-looking drug policies to reach the intentions of our global drug control treaties far more effectively than the previous attempts of blanket prohibition.

For a long time, attempts were made to restrict the cultivation, distribution and consumption of cannabis through prohibitive and repressive drug policies. As a result, the use, availability and THC potency of cannabis in the unregulated illicit market has been increasing, while contamination continues to pose an unpredictable health threat to citizens in the EU (1). Finally, the failed drug policies of the past decades have led to organised crime generating billions in revenue year after year.

The proposal from Germany aims for effective youth and health protection and addresses the immediate weaknesses of the old prohibition paradigm, such as the expansion of the illicit market and the proliferation of contaminated substances. Thus, the objective of this approach is in line with the purpose of the 1961 as well as 1988 UN Convention against Illicit Traffic in Narcotic Drugs and Psychotropic Substances and the objectives of the EU Drugs Strategy 2021-2025.

Health protection as well as the strengthening of health literacy are central concerns of the European Union and its Member States. Accordingly, we consider the current German approach to be an important signal to advance towards an urgently needed reform of European drug policy. On the way to such a "European New Drug Deal", the balance between public health, law enforcement and market economy is crucial to assume an international pioneering role.

In this comprehensive effort towards a new consensus, the Commission can rely on the support of all stakeholders. We, the diverse European cannabis industry and associations, continuously work towards increased research and knowledge sharing in the epistemic community. We see ourselves as a resource for evidence-based policy making and are an ideal partner for consultation and subject-matter evaluation. We trust that the EU-Commission will support all endeavours to strengthen a paradigm shift in drug policy.